One inscription, one business, a century of history, four generations of people who incessantly succeeded each other. The signs of the passage of time indelibly so as the older to tell the story to the younger, so the past to continue to show the way.

Learning the art next to Asia Minors of Odessa

Turbulent and adventurous the path of the founder and its progeny that then took the baton of business on the island. We catch the thread of Ariadne in the mid 19th century when the pirates brought from Samos to Kalymnos Nomikos Vouros that in order to live his family embarks on a sponge diving ship as simple crew.  18 divers of the Captains crew died at that kourney (the Skafandro technic was discovered and decimated lives). Then Nomikos decides to dive too, to help the desperate Captainand he drowns.

The four orphaned children, aged 7-11 years, are leaving immediately for Russia and specifically Odessa, under the protection of Kyrani family that operated business in the far country. Michael Vouros 10 years old kid is working initially at crafts with slippers of Kyrani family and three years after he gets a job in a pastry shop. The Asia Minor, from Constantinople and Smyrna confectioners, did then in Odessa big business and beside them studied the small Kalymnian. There he learned how to make Turkish delight, sweet griddle, the copenhagen, waffles and then he opened his own small workshop. 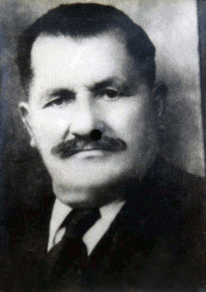 Sweetening every day people of all ages.

It was in 1918 when he decides to return to his homeland. The first patisserie in Kalymnos is a fact. It starts in Patithries and sweetens everyday all Kalymnians. With sweets like galaktomboureko, copenhagen, cake and baklava addicts Kalymnians in exquisite flavors. All the cafes of the island are supplied from the shop the delights and buns serving their clients with their coffee. All the angles left from separating the delight were evenly shared to children and adults who daily went out of the pastry shop, waiting for Michael Mastro to see them and shout them the familiar treat. It was hard and miserable years and the offering hand is not forgotten. The older still remember him after many years of his death.

From Patithries to the central square

His son Nomikos (Mikes) is standing next to him, he learns the job and his father waits for the time to pass the torch. Italians ruled Kalymnos at the time, the son refuses to declare obedience to the conquerors and goes to join the Constitution of Dodecanesians Volunteers. Once hospitalized wounded along the way he was  captured by a misunderstanding as a suspect for sabotage, tortured and saved from the firing squad. He returns to the island and takes action at his father’s patisserie. After 46 years there is a shift of business premises and confectionery longer works in the square with cafes, the original current of coffee “Ninis” and then in the building that houses the cafe “edelweiss”. Near him his two boys Michalis and Panagiotis and his both girls Katerina and Eleni employed in sales, causing various comments at that time (60s), it was the first female workers in Kalymnos.

Michael is the new craftman in business since he dogged his grandfather and “stole” the secrets of his art, and the communication with clients. He still remembers when he was a little child 11 years, sitting outside his shop in Patithries and he spotted from far the client coming he was running to prepare the order leaving his father speechless with the intelligence and agility he had. At that time the customers were stable everyday and especially the owners of cafes. The youngster Michael knew the delight that everyone chose for its customers (roses, mastic, bergamot) and the size of dessert (30, 24).

Michael in manufacturing and Panagiotis on sales.

Struggle for survival and establishment

The family works for five years (in the meantime Panagiotis had gone to America) at a restaurant that serves pastries, a Greek colony in Boston, to open a litle bit later four family owned pastry shops in central locations of the city, the so-called “Vouros Pastry” acquiring and there fanatic customers. One of these shops operate across from Cambridge University and becomes a student hangout. By an agreement the family makes with one of the students who had a talent for painting (free dessert and coffee every day for a month) the shop acquires its facade the beautiful Kalymnos!

The recognition was not late and the local press refer to praise the Greek family Vouros and unrivaled technique in pastry!

Although the business outlook for the family was bright in America, they had all left their soul in the small country, and after an absence of fourteen years from Kalymnos they return (1986) and begin to deal with what they knew to do well: pastry making.

Michael Vouros remembers the first days the shop at Vasilika worked again and the people that were making lines in front of the shop to taste again his favourite sweets that only his family knew how to create. Later he opens another shop at Agios Stefanos and a third in neighboring Kos.

The entrance of the fourth generation

Today in the business flies new blood. The children of Panagiotis and Michalis, the two Mikes have entered dynamicly at work putting their own stamp on the preparation of sweets, but also on diversion and disposal on the market. The two young confectioners appear selective in the use of raw materials for the manufacture of their products and strict with all rules of hygiene, and when their clients leave the patisserie they taking with them a sweet taste tradition and modern pastry.

Besides grandfather Nomikos (Mikes) had put purpose the company to continue in family hands and from small children he did his grandchildren … a systematic propaganda. Mikes son of  Michalis remembers that while they were still on the beach, his grandfather formed cakes in the sand and made him after decorating them. The preparation for the succession!

Both cousins love their job and had studies. Son Michalis at the School of Tourism in Rhodes and then he completed his practice at five star hotel kitchens of Rhodes and Kos. The other cousin Mikes son of Panagiotis attended IEK Le Monde in Athens.

These two children are not the only ones employed in the business. Pretty much all family members have done and still do wages in the pastry shop and workshop alongside their studies most. Besides the future of the pastry shops promises auspicious and in such difficult times that you have to build somewhere and especially in your family business, if anything else it provides security.

We use cookies to ensure that we give you the best experience on our website. If you continue to use this site we will assume that you are happy with it.AcceptNoRead more